This candy is fun and easy to make, and it’s an easy treat to package up for friends and neighbors this Christmas.  And to place in a jar on your counter top so you can suck on a piece here and there all month long, like I plan to do.

You start by bringing some light corn syrup and sugar to a boil.  Once it reaches 300 degrees or hard-crack stage, remove it from the heat, stir in red food coloring and cinnamon oil and pour the mixture into a pan. You can find a description of hard-crack stage here.
For the rock candy, once the candy has cooled you simply bang on it with a spoon (gently) and it will easily crack into pieces.  Kids totally love being the candy smashers.

Pour the candy pieces into a plastic ziplock bag, sprinkle in some powder sugar, seal the bag and give it a shake to coat all the pieces evenly. You can make this in any flavor or color, or use this recipe to make suckers as well. 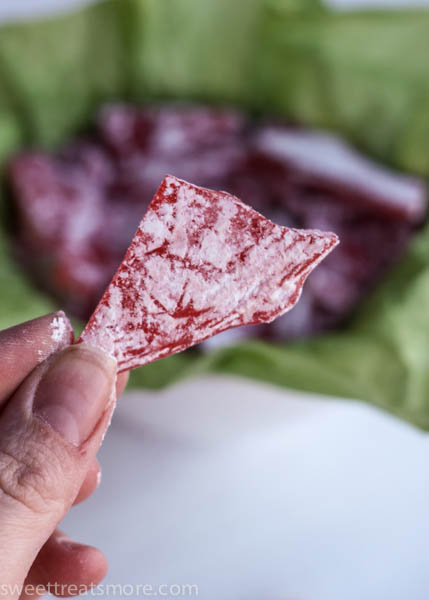