This dish is a combination of my boys’ favorite meals–pizza and spaghetti.  It’s like a deep-dish spaghetti pie with pepperoni in every bite, is perfectly cheesy, and has a thick pizza-like crust of spaghetti noodles.
Sounding delicious?

It’s a lot easier than making a pizza but takes a little more effort than making spaghetti.   Lately I’ve seen a similar recipe using canned spaghetti in tons of food magazines. It sounded and looked like something we’d love, but I just don’t dig canned spaghetti. Cooking some noodles and buying a jar of your favorite pasta sauce really isn’t that much harder.
Here’s a look at how you make it…

Layered in a baking dish–1) Spaghetti noodles 2) topped with ground turkey, 3) topped with spaghetti sauce & pepperoni, 4) topped with cheese and more pepperoni.  All baked for thirty minutes until heated through and the cheeses are nice and melted.

This might be my new cop-out meal. You know, for those days I typically make spaghetti or order pizza because I simply don’t have a plan. It’s different enough but still so easy and my family loves it! 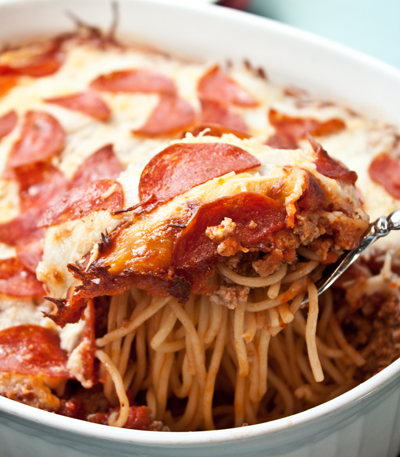